The following excerpt is from Rebecca Burgess’ new book Fibershed: Growing a Movement of Farmers, Fashion Activists, and Makers for a New Textile Economy (Chelsea Green Publishing, November 2019) and is reprinted with permission from the publisher.

What do clothes have to do with agriculture? The simple answer to this question is: a lot. On average, over 80 percent of the cotton grown in the United States annually is genetically modified to withstand the use of a range of herbicides and pesticides, and less than 1 percent is certified organic. And while two-thirds of Americans support GMO labeling for their food, few understand the role GMOs play in their clothing. In fact, we have yet to broach any large-scale public discussion of how GMO agriculture as a whole is impacting the health and diversity of our landscapes, rural economies, and personal health. Due to the omission of these larger conversations we’ve largely left the genetic engineering of fibers out of the land-use ethics debate altogether, and as a result there is little to no transparency offered on garment hangtags enabling us to determine if our clothing is genetically modified or not. Unless we are searching out and purchasing Global Organic Textile Standard (GOTS) certified garments. As a result of the large gap between our knowledge of how clothing is made and where the ingredients are sourced from, when we make decisions as a consumer on what to buy, we are largely making them blindly.

Consider this, for example: American-made wool garments are rare despite the United States being the fifth-largest wool-producing nation in the world. Almost all of our wool socks and suits are made in Australia, New Zealand, and China. Beyond that, over 70 percent of the fibers we wear originate from fossil carbon, and almost every garment is colored with dyes that are sourced from fossil carbon. Plastic microfibers that are introduced into rivers, streams, and oceans as a result of the washing of synthetic clothing are contaminating the marine food web as well as our drinking water. Significant concentrations of fiber lint have been found in the deepest ocean habitats with yet-to-be-determined consequences. Working conditions for textile employees are notoriously challenging, and less than 1 percent of clothing sold in the United States is Fair Trade Certified. And now extreme genetic engineering is being offered to consumers as a high-tech solution to the issues created by our antiquated, synthetic, toxic chemistry; fossil carbon dependencies; and overconsumption. Most wearers have no idea that these proprietary biotech technologies share a host of supply-chain and business architecture problems and have not yet been assessed for their potential negative consequences to land, water, flora and fauna, and regional economies despite any claim they might make to the contrary.

Improving the existing centralized systems of textile production, currently based largely overseas in countries with minimal attention to human rights and weak environmental standards, is one avenue for social and environmental change that offers rays of hope. But it has not been without countless disappointments. And novel technologies also have a role to play in reducing negative impacts of the garment industry. But both of these tools for reform on their own do nothing to transform the existing power dynamics and economic models that provoked the environmental and labor rights catastrophes we are currently digging ourselves out of globally. And yet it is these two strategies that dominate the agendas of sustainability teams at the world’s largest textile companies, that are written about and debated within the trade group journals, and that receive awards at global textiles conferences, reaping investor capital. As a result the conversation that inserts economic and climate justice into the DNA of the systems-change thought is still waiting for its day in the sun.

My book Fibershed: Growing a Movement of Farmers, Fashion Activists, and Makers for a New Textile Economy seeks to open the door for that conversation, while recognizing that many more individuals and organizations are also expanding this dialogue on a daily basis. It is a vision of change that focuses on transforming our fiber and dye systems from the soil up. This vision embraces everyone involved in the process, including farmers, ranchers, grassroots organizers, designers, manufacturers, cut-and-sew talent, crafters, fashion pundits, investors, transnational brands, and you—the wearer. It is a vision for globally impactful solutions that consider and provide a voice on how to reconfigure the seat of power and begin putting decision making into the hands of those most familiar with the social and ecological infrastructure of their communities. It is a vision that enhances social, economic, and political opportunities for communities to define and create their fiber and dye systems and redesign the global textile process. It is place-based textile sovereignty, which aims to include rather than exclude all the people, plants, animals, and cultural practices that compose and define a specific geography.

I call this place-based textile system a fibershed. Similar to a local watershed or a foodshed, a fibershed is focused on the source of the raw material, the transparency with which it is converted into clothing, and the connectivity among all parts, from soil to skin and back to soil. In the fibershed where I live, for example, natural plant dyes and fibers such as flax, wool, cotton, hemp, and indigo are being grown using practices that are both traditional and modern, and many of these cropping and livestock systems are showing benefits that we are just beginning to document in detail, such as ameliorating the causes of climate change, increasing resilience to drought, and rebuilding local economies.

Fibershed systems borrow considerable inspiration and framework design from the Slow Food movement, which can be traced back to 1986 when the movement’s founder, Italian farmer Carlo Petrini, organized a protest against the opening of a McDonald’s chain restaurant near the Spanish Steps in Rome. Petrini’s galvanizing quote ushered in global affirmation of the need to attend to our food system: “A firm defense of quiet material pleasure is the only way to oppose the universal folly of Fast Life.” The Slow Food movement quickly gained a following, attracting rural and urban residents alike. It joined an energetic effort by people around the world to address how our food is farmed, who is farming it, how it is processed, and who has access to it. Today these questions guide the mission statements of thousands of non-governmental organizations (NGOs) focused on reforming our food system, and yet we do not see an equally formidable NGO presence that has developed a strategy to support a separate but no less significant product from our working landscapes: our clothing. But there is a grassroots movement afoot to change this, led by farmers, ranchers, artisans, and small- to mid-scale textile manufacturers. Biosphere-based fibers such as flax, nettle, hemp, wool, milkweed, cashmere, angora, and cotton are making a remarkable comeback, and awareness is being raised on the undeniable fact that the soil that feeds us is also the soil that clothes us.

Rebecca Burgess, M.ed, is the executive director of Fibershed, chair of the board for Carbon Cycle Institute, and the author of Harvesting Color. Her newest book is Fibershed: Growing a Movement of Farmers, Fashion Activists, and Makers for a New Textile Economy (Chelsea Green Publishing, November 2019). Find out more at www.fibershed.com. 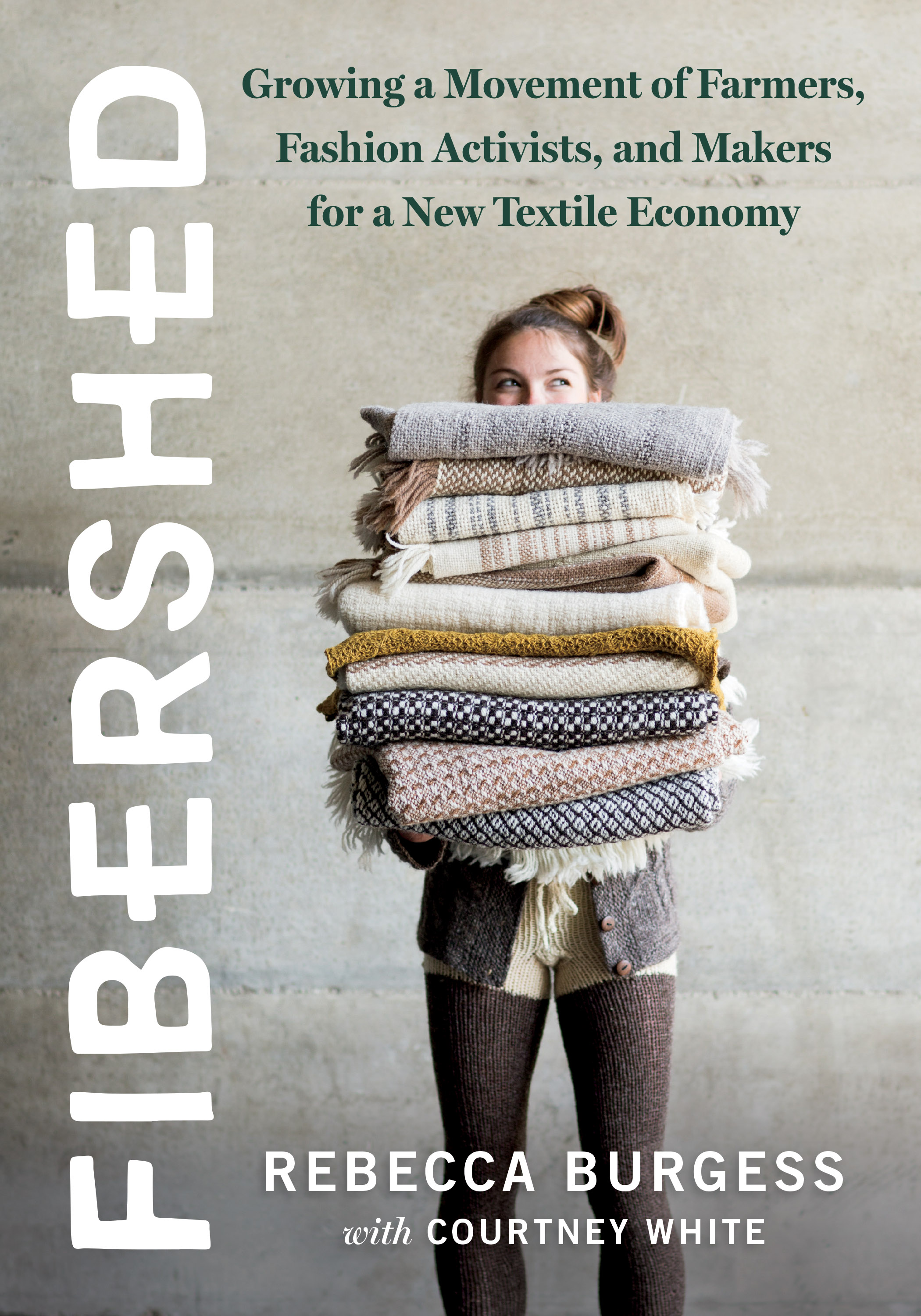