In a society where we’re constantly encouraged to try new things, I have great respect for those that dedicate their entire lives to just one endeavour. Mr. Wu is one of those people. At fifty-eight years old, he has achieved national acclaim as China’s top Sichuan embroidery artist. His pieces, which can take several years and countless hours to complete, have been highly coveted, with some selling for several hundred thousand GBP. 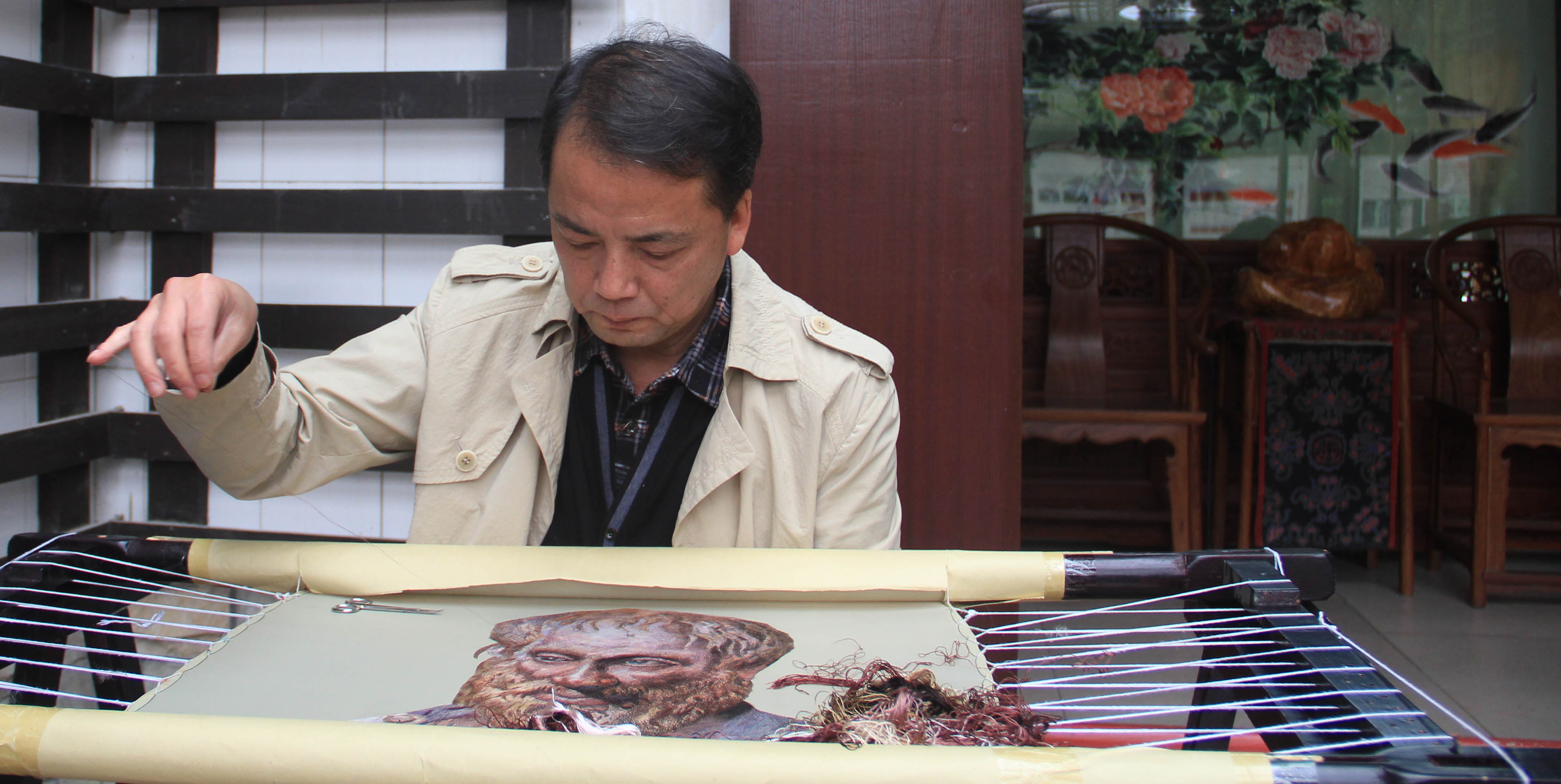 What is Sichuan embroidery?

Sichuan embroidery has a long history, dating back 2000 years to the Han dynasty when it arose as an art form sewn exclusively on garments for elite members of the imperial court. Compared to other forms embroidery, the unique aspect of the Sichuan form lies in its resemblance to watercolour paintings. Using fine silk threads barely visible to the human eye, a silky smooth texture is achieved through meticulous stitching and harmonious colour transitions.

I first learned about Mr. Wu’s art work through the Museum of Embroidery in China. His embroidery shone, brilliant and smooth. A medley of colours were revealed as I examined the work from different angles. His mastery was immediately clear, utterly mesmerized and I quickly flew to Sichuan to meet him. I wanted to learn more about his story and work with him to share the beauty of Sichuan embroidery with a wider audience.

On a sunny afternoon I entered the embroidery park, which was bursting with greenery. In this lush protected area, specially designated for the country’s top Sichuan embroidery artists, one and two story studios could be found inconspicuously embedded within the landscape. Windows peeked from behind the canopy of trees, and beside every single window sat a chair and embroidery canvas, which more often than not, was occupied by an artist hunched over threading intently. In a busy and fast paced world, this place felt like an oasis where time slowed, where the only thing that mattered was appreciating the world around you, and capturing it between the threads. I felt a deep and immediate intimacy within this world.

Mr. Wu’s studio is modern two story building with large bright windows. Upon entering, I was immediately enveloped in a visual library filled with hundreds of works of embroidery, framed large and small in mahogany wood and displayed on shelf after shelf. The walls gleamed with numerous awards and trophies. “Sichuan Embroidery Artist of the Year,” “Embroidery Lifetime Achievement Award,” you get the idea.  As I navigated through this maze, Mr. Wu greeted me from across the room. We sat down near a window overlooking the river nearby and began to chat as the water trickled peacefully outside.

On paper, he worked as an embroidery artist for 41 years, but in reality, he was a child when he first started. He grew up in Sichuan, where his mom worked as an embroidery artist. She often brought extra work home, working late into the night in order to make enough to feed their family. “I would watch her whenever she sewed, when she wasn’t looking, I would sneak over and sew a few stitches onto her work,” he smiled as he recounted.

His passion for the craft would continue. At the age of 16 he began working in embroidery and quickly became the most talented new artist in the studio where he worked. “Becoming a great embroidery artist requires patience. It took me a decade to learn just the basic stitching techniques, there are 130 stitching techniques in total and I still have not mastered all of them”, he chuckled. “The work you sew is directly related to how you feel, only a calm mind can produce good work, it becomes a lifestyle”. His peaceful demeanor and soothing voice suddenly made a lot more sense to me.

But for Mr. Wu, like for all of us, life inevitably had its ups and downs. After spending nearly a decade dedicated to perfecting his art and building a reputation for his work, the Sichuan embroidery industry, which relied heavily on tourism, began to decline as tourism waned. He was forced to leave the job he loved and began working as a taxi driver in order to provide for his family.

“It was a dark time, to go from the pedestal of a respected artist to being a taxi driver, but it was what I had to do.” Most passengers who were in the mood for conversation would eventually find out that he used to work as an embroidery artist, to their surprise. One passenger in particular said to him, “Why are you doing this? You have to go back and pick up where you left off." It struck a chord with him, one which he remembers to this day.

From that day on, his singular goal became fixated on reopening his own studio. After several years of this single-minded focus, he saved enough money to make this dream come true, and never looked back. In the span of almost 2 decades, not only did Mr. Wu become a master of his craft, but he also mentored thousands of embroidery artists at his studio. He said that his biggest goal is to pass on all his knowledge, to make sure that the art of Sichuan embroidery thrives through his students and their works.

I left that meeting as enthralled as when I first laid eyes on his breathtaking works. I feel truly lucky to be working with Mr. Wu. Together, we make jewelry that helps the art of Sichuan embroidery travel across the globe.