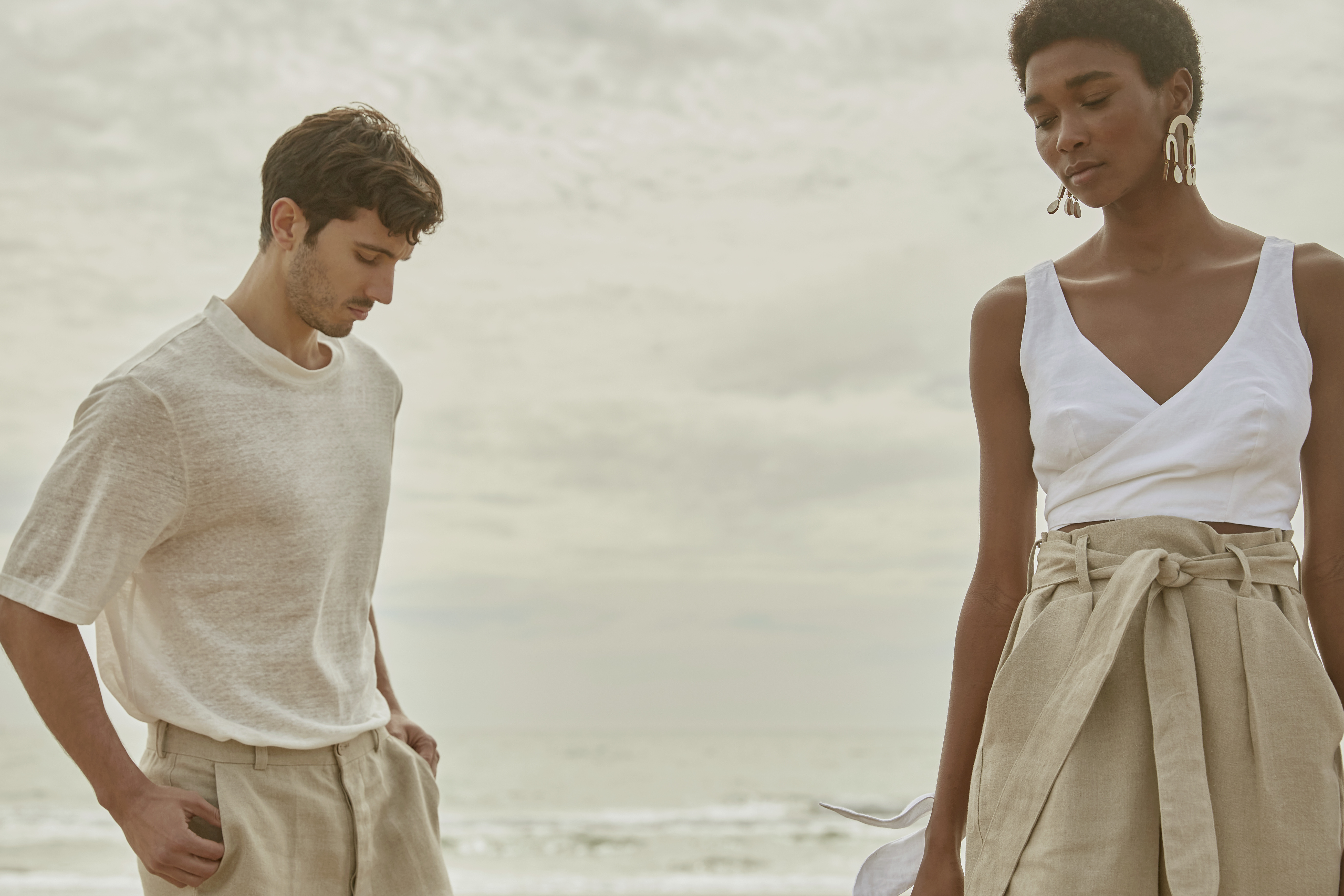 Trace Collective is a radically transparent label that uses fashion as a tool to drive environmental regeneration, supporting nature-based solutions to climate change through fabric sourcing. All of Trace Collective’s unique pieces are fully biodegradable and designed for circularity, and they’re equipped with a QR label that allows you to explore their origin and connect with the stories of the makers.

Prices are cheaper and cheaper but, in theory, the human labour and environmental resources used to produce our clothing are not following the same trend, right?

Workers in any country in the world are subject to an increasing cost of living which should be matched with higher salaries, and environmental resources are becoming more and more scarce and therefore should become more expensive. Well, if the prices of the clothes that we buy are to become cheaper, something's got to give. That is how cutting corners, reducing salaries and disregarding safety measures became standard practice in the industry.

What globalised production means in fast fashion is that those on the top of the value chain (fast fashion companies) get to choose where the products are made, and they get to switch if a factory says, we can’t make it that cheap anymore. It is what some people have referred to as a "race to the bottom".

Arif Jebtik, owner of a garment factory in Bangladesh, explains how this comes into practice: “when the stores are coming to us, they tell us, look, this store is selling this for 5 dollars, so we need to sell it for 4. So we squeeze. Then another store comes and says, hey, they are making it for 4? Our target price is 3. Otherwise you are not getting our business. Because we want that business so badly, and we don’t have other options, we say OK”.

But pressing on production costs can be dangerous, as manufacturers can only revert to two options in order to meet the price targets: paying workers less or cutting down on safety conditions.

In April 2013, Rana Plaza collapsed in Bangladesh, killing 1,134 people and harming another 2,500. Workers had repeatedly pointed out the cracks in the building, and other businesses and tenants sharing that same building had been evacuated. However, garment workers were forced backed into work by factory owners, under the threat of losing their jobs if they didn't. And that is when the building came down. Familiar brands such as El Corte Ingles, Mango, Carrefour, Benetton and Primark were producing there. Many of them failed to engage in reparation talks. A few months before, in September 2012, Ali Enterprises had burned to the ground in Pakistan, claiming the lives of 250. These two catastrophes, together with other large accidents, made up for the deadliest year in the garment industry ever. Oddly, it was also the most profitable year for the fashion industry in history.

Rana Plaza brought (temporary) international attention to the conditions of garment workers, which led to signature of the Bangladesh Accord (Accord on Fire and Building Safety). This agreement represented a fundamental positive step in safety measures. However, six years after not enough progress has been made to reform the fashion industry. While greenwashing and empty promises have become abundant, and apparently effective to dilute public pressure, major brands are still systematically failing to pay their workers living wages, a violation both of their internal Codes of Conduct and of international human right norms.

Most of the world’s clothes are made in Bangladesh, India and Cambodia. In total, 15 million people in Asia are employed in the fashion industry, 80% of whom are women. It is estimated that more than half of them are paid just their country's minimum wage, which sometimes is about half of an actual living wage.

Take the case of Bangladesh, for example. There alone, 3.5 million workers in 4,825 garment factories produce goods for export to the global market. The average salary of a factory worker in Bangladesh is 33 USD per month, well below the average living wage of 60 USD per month. Unsafe working conditions still abound, if not because of workers being forced into unsafe building structures, then because of the toxicity of the products and materials they have to use. Child labour is also prevalent, with Bangladesh being one of the 7 countries in the world where this is common practice, according to Unicef. Incredible as it may sound, an estimated 170 million children are engaged in child labour around the world today (that is 11% of the world's children population), most of them working in the clothes supply chain.

Hear the story of Kalpona Akter, former Bangladeshi child garment worker who joined their workers union, telling about the beatings and constant threats that unionised workers were subject to, and how becoming a member of the union made it impossible for her to find a job afterwards, as told by the Fashion Revolution team in their podcast. Fashion revolution published three short podcast episodes telling the stories of garment workers, and they are a no-miss.

Unfortunately, problems don’t stop after looking at wages and labour rights. Workers health is often in jeopardy, and not only due to unsafe building structures. Environmental issues often become very intertwined with human health issues, not only on a macro scale (i.e. thinking of how destroying the planet will affect us) but on a very specific micro setting, which can be easily paired with stories. Here are two human stories shared in the documentary The True Cost that got completely stuck on our brains.

The first one is about tanneries and their impact on human health. Take the leather factories of Kanpur, in India, where most of our leather is produced (yes, even the nice designer handbags). These tanneries are not only polluting the river Ganges, sacred to millions of Hindus, but are also severely affecting the health of thousands in the process. Every day, more than 50 million litres of toxic liquid pour out of the local tanneries and into the river, containing heavy chemicals that flow into local water. Incidence of dermal problems, from skin rashes and dermatitis to jaundice and cancer, has spiked.

But we don’t need to go as far as India to see the effects of unsustainable practices on human health. There is strong data to suggest that the aggressive use of pesticides in cotton farming in Texas, US, has led to a spike in tumours and cancer deaths in men under 50. And it goes beyond those in the supply chain. The stuff that goes into our clothes during their manufacturing is then the stuff that goes into our bodies. Our skin is our largest organ, and we often tend to forget that we absorb what we put on it. It is probably too early to fully understand how all the damaging substances that we are putting into our bodies (through the food we eat, the air we breathe, the clothes we wear) are harming us, but we strongly believe we will soon understand it better and look back in horror.

Our second story on the health impacts of fast fashion is a story about pesticides and genetically modified seeds, all courtesy of Monsanto, and their linkages with farmer suicide rates in India. After the second world war and pre independence of many colonies, Western countries started pushing the use of chemical fertilisers in emerging economies. When fertilisers didn't sit well with local native plants, plants were reengineered to be able to absorb chemicals more effectively (funny, right?). Monsanto, which has become the largest seed and chemical corporation in the world, patented the crops, effectively rolling out a seed monopoly. Could farmers have bought any other seeds? Well, that’s the problem, not anymore: regular seeds no longer grew on the soil, because it had been so eroded after the use of fertilisers for years.

As activist Vandana Shiva explains in The True Cost, farmers go into debt to buy seeds because of their high cost (17,000% more than that of normal seeds). Then they get into deeper debt because the seeds don't deliver on the promise of controlling pests, so they have to buy more pesticides. But pesticides have been called ecological narcotics for a reason: the more you use them, the more you need to use. And after a while their yield begins to decline because the soil is now contaminated. Most of India’s cotton is grown in Punjab, which coincidentally is the largest pesticide user in India. Birth defects, cancer incidence and mental illness have spiked in the past decades among local population in the area. Dozens of children in every village are suffering from severe mental and physical retardation. And suicides are claiming the lives of too many: when seed and pesticide companies go back to the farmers to claim their debt, if the farmers are unable to pay, the company will take their land.

In the last 16 years, 250,000 Indian farmers have killed themselves partly as a result of going into dept to buy genetically modified seeds. That is about 1 farmer every 30 minutes, and it is the largest recorded wave of suicides in history.

The point is: there is enough evidence around to support the case that the vast majority of the clothes that we buy in Western countries have behind them stories of pain and suffering. Every day, more and more people decide that they don't want to wear those stories, and are demanding companies to tell them #whomademyclothes (in 2018, 3.25 million around the world joined the campaign). We hope that this post makes you join that wave of consumers demanding change, our power is immense.

The sources used to put together this post are the following:

The True Cost Movie (available for rent or purchase on their website, where you can find tons more of resources, as well as in Netflix in most countries).

The Wrap Dress in White

The Mao Shirt In Black

The Wrap Shirt In Black

The Tie Top in White